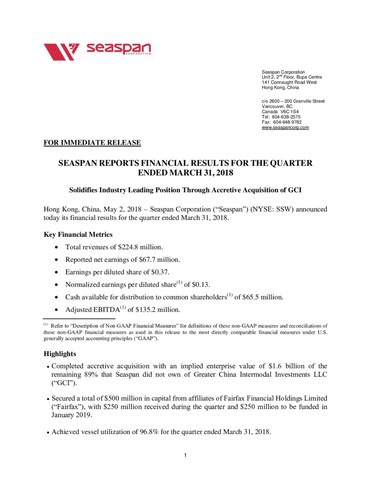 Bing Chen, President and Chief Executive Officer of Seaspan, commented, "The completion of the GCI acquisition during the first quarter solidified our industry leading position and achieved a number of important strategic objectives for the Company while being accretive to earnings per share. On the strategic side, the acquisition of GCI improved our fleet composition as we increased our exposure to larger, more modern containerships that are in demand by our customers. In addition, we expanded our relationships with our customers, significantly increasing our contracted future revenue and EBITDA. Finally, the GCI acquisition provided an opportunity for Seaspan to expand its partnership with Fairfax and other financing partners, reinforcing the strength of our integrated platform."

Mr. Chen continued, "Over the past few months, we have made significant progress across multiple areas within the Company. We continue to remain focused on operational excellence by providing best in class integrated solutions and service to our customers. Importantly, our industry remains fragmented, and we are actively seeking opportunities to grow our business and improve our returns on invested capital. In doing so, we remain disciplined in evaluating and executing on growth opportunities in order to generate long term shareholder value."

In January 2018, Seaspan accepted delivery of the MSC Yashi B, an 11000 TEU vessel. The vessel was constructed at HHIC-PHIL Inc. and commenced a 17-year fixed-rate bareboat charter with MSC Mediterranean Shipping Company S.A. ("MSC"). Upon completion of the bareboat charter period, MSC is obligated to purchase the vessel for a pre-determined amount. This delivery was financed with a previously committed lease facility.

In February 2018, Seaspan purchased two second-hand 2500 TEU vessels and entered into fixed-rate time charter agreements for the vessels with Maersk Line A/S. Each of the time charters is for a term of four years with options for up to an additional two years at increasing charter rates.

In February 2018, Fairfax invested $250.0 million in Seaspan in exchange for debentures bearing 5.5% interest and Class A common share purchase warrants.

In March 2018, Fairfax entered into definitive agreements for an additional $250.0 million investment in Seaspan in exchange for debentures bearing 5.5% interest and Class A common share purchase warrants, which will be funded in January 2019 subject to customary closing conditions.

On March 13, 2018, Seaspan acquired the remaining 89% of GCI that it did not own from affiliates of The Carlyle Group and the minority owners of GCI.

In March 2018, Seaspan entered into a secured credit facility for $100.0 million. The loan bears interest at LIBOR plus a margin and is secured by 11 previously unencumbered vessels currently owned by Seaspan.

In April 2018, Seaspan declared quarterly dividends on its common and preferred shares for the first quarter of 2018 totaling $35.4 million. The annual rate of the Series F preferred shares dividend increased to 10.5% on January 1, 2018.

In April 2018, David Spivak, Chief Financial Officer ("CFO") of Seaspan, gave notice that he is exercising his right to terminate his employment with Seaspan effective June 29, 2018 to pursue other opportunities. Mr. Spivak will continue in his current role until May 5, 2018, after which Mr. Ryan Courson will be appointed CFO and Mr. Spivak will continue with Seaspan as Special Advisor to the President and Chief Executive Officer through the end of June.

In April 2018, Mark Chu, General Counsel and Chief Operating Officer of Seaspan, gave notice that he plans to terminate employment with Seaspan effective August 31, 2018 to pursue other opportunities. Mr. Chu will remain in his current roles until successors are appointed, and will continue with Seaspan through to the end of August to help facilitate a seamless transition.

In April 2018, Seaspan entered into a secured term loan facility for up to $120.0 million to finance two 10000 TEU vessels which are scheduled to be delivered in the second quarter of 2018. The loan bears interest at LIBOR plus a margin.

The following table summarizes Seaspan's vessel utilization for the quarters ended March 31, 2018 and 2017:

Revenue increased by 11.7% to $224.8 million for the quarter ended March 31, 2018, compared to the same period in 2017, primarily due to the addition of 16 operating vessels from the acquisition of GCI on March 13, 2018, interest income from leasing five bareboat charter vessels to MSC, and the full-year impact of the delivery of one 14000 TEU vessel in 2017. These increases were partially offset by a decrease in revenue due to the sale of four 4250 TEU vessels in 2017.

The increase in operating days and the related financial impact thereof for the quarter ended March 31, 2018, relative to the same period in 2017, is attributable to the following:

Vessel utilization increased for the quarter ended March 31, 2018, compared to the same period in 2017, primarily due to fewer unscheduled off-hire days.

During the quarter ended March 31, 2018, Seaspan completed dry-dockings for five 2500 TEU vessels, one 3500 TEU vessel and one 4250 TEU vessel, one of which occurred while the vessel was off-charter.

Ship operating expense increased by 8.6% to $49.5 million for the quarter ended March 31, 2018, compared to the same period in 2017, primarily due to an increase in ownership days from vessel deliveries and acquisitions, and higher spending on spares and repairs from planned maintenance of vessels 8500 TEU and less in size.

Depreciation and amortization expense increased by 8.0% to $53.9 million for the quarter ended March 31, 2018, compared to the same period in 2017, primarily due to the addition of vessels from the GCI acquisition and an increase in the number of vessels which dry-docked during the quarter.

General and administrative expense decreased by 2.9% to $7.3 million for the quarter ended March 31, 2018, compared to the same period in 2017, primarily due to lower share-based compensation expense.

Operating lease expense increased by 17.7% to $31.2 million for the quarter ended March 31, 2018, compared to the same period in 2017, primarily due to the delivery of one vessel in 2017 that was financed through a sale-leaseback transaction and an increase in LIBOR.

Interest expense and amortization of deferred financing fees increased by $10.5 million to $39.0 million for the quarter ended March 31, 2018, compared to the same period in 2017, primarily due to the borrowings related to the delivery of five 11000 TEU vessels on bareboat charters, debt assumed as part of the acquisition of GCI, an increase in LIBOR, and additional interest from the debentures issued to Fairfax.

The change in fair value of financial instruments resulted in a gain of $19.3 million for the quarter ended March 31, 2018 and was primarily due to an increase in the forward LIBOR curve.

Seaspan provides many of the world's major shipping lines with creative outsourcing alternatives to vessel ownership by offering long-term leases on large, modern containerships combined with industry-leading ship management services. Seaspan's operating fleet consists of 112 containerships representing a total capacity of over 900,000 TEUs, including four newbuilding containerships on order scheduled for delivery to Seaspan by mid-2018. Seaspan's current operating fleet of 108 vessels has an average age of approximately six years and an average remaining lease period of approximately five years, on a TEU-weighted basis.

SEASPAN CORPORATION
RECONCILIATION OF NON-GAAP FINANCIAL MEASURES
FOR THE QUARTERS ENDED MARCH 31, 2018 AND 2017
(IN THOUSANDS OF US DOLLARS)

SEASPAN CORPORATION
RECONCILIATION OF NON-GAAP FINANCIAL MEASURES
FOR THE QUARTERS ENDED MARCH 31, 2018 AND 2017
(IN THOUSANDS OF US DOLLARS, EXCEPT PER SHARE DATA)

Normalized net earnings is a non-GAAP measure that Seaspan believes is a useful measure because it excludes those items that Seaspan believes are not representative of its operating performance.  Normalized net earnings and normalized earnings per share are not defined by GAAP and should not be considered as an alternative to net earnings, earnings per share or any other indicator of Seaspan's performance required to be reported by GAAP. In addition, this measure may not be comparable to similar measures presented by other companies.

SEASPAN CORPORATION
RECONCILIATION OF NON-GAAP FINANCIAL MEASURES
FOR THE QUARTERS ENDED MARCH 31, 2018 AND 2017
(IN THOUSANDS OF US DOLLARS)

Adjusted EBITDA is a non-GAAP measure that Seaspan believes provides useful information to investors in assessing Seaspan's results of operations. Seaspan believes that this measure is useful in assessing performance and highlighting trends on an overall basis. Seaspan also believes that this measure can be useful in comparing its results with those of other companies, even though other companies may not calculate this measure in the same way as Seaspan. The GAAP measure most directly comparable to Adjusted EBITDA is net earnings. Adjusted EBITDA is not defined by GAAP and should not be considered as an alternative to net earnings or any other indicator of Seaspan's performance required to be reported by GAAP.

Seaspan does not intend to revise any forward-looking statements in order to reflect any change in Seaspan's expectations or events or circumstances that may subsequently arise. Seaspan expressly disclaims any obligation to update or revise any of these forward-looking statements, whether because of future events, new information, a change in Seaspan's views or expectations, or otherwise. You should carefully review and consider the various disclosures included in this Annual Report and in Seaspan's other filings made with the Securities and Exchange Commission, or the SEC, that attempt to advise interested parties of the risks and factors that may affect Seaspan's business, prospects and results of operations. 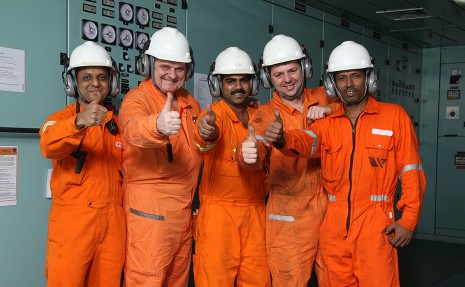